Is it bipolar disorder? Here’s how to recognize the signs and symptoms, tell the difference between bipolar I and bipolar II, and get a diagnosis for mania, hypomania, bipolar depression, and cyclothymia.

What is bipolar disorder?

We all have our ups and downs, but with bipolar disorder (once known as manic depression or manic-depressive disorder) these peaks and valleys are more severe. Bipolar disorder causes serious shifts in mood, energy, thinking, and behavior—from the highs of mania on one extreme, to the lows of depression on the other. More than just a fleeting good or bad mood, the cycles of bipolar disorder last for days, weeks, or months. And unlike ordinary mood swings, the mood changes of bipolar disorder are so intense that they can interfere with your job or school performance, damage your relationships, and disrupt your ability to function in daily life.

During a manic episode, you might impulsively quit your job, charge up huge amounts on credit cards, or feel rested after sleeping two hours. During a depressive episode, you might be too tired to get out of bed, and full of self-loathing and hopelessness over being unemployed and in debt.

The causes of bipolar disorder aren’t completely understood, but it often appears to be hereditary. The first manic or depressive episode of bipolar disorder usually occurs in the teenage years or early adulthood. The symptoms can be subtle and confusing; many people with bipolar disorder are overlooked or misdiagnosed—resulting in unnecessary suffering. Since bipolar disorder tends to worsen without treatment, it’s important to learn what the symptoms look like. Recognizing the problem is the first step to feeling better and getting your life back on track.

Signs and symptoms of bipolar disorder 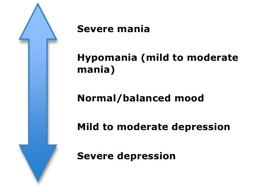 Bipolar disorder can look very different in different people. The symptoms vary widely in their pattern, severity, and frequency. Some people are more prone to either mania or depression, while others alternate equally between the two types of episodes. Some have frequent mood disruptions, while others experience only a few over a lifetime.

In the manic phase of bipolar disorder, it's common to experience feelings of heightened energy, creativity, and euphoria. If you're experiencing a manic episode, you may talk a mile a minute, sleep very little, and be hyperactive. You may also feel like you're all-powerful, invincible, or destined for greatness.

But while mania feels good at first, it has a tendency to spiral out of control. You may behave recklessly during a manic episode: gambling away your savings, engaging in inappropriate sexual activity, or making foolish business investments, for example. You may also become angry, irritable, and aggressive—picking fights, lashing out when others don't go along with your plans, and blaming anyone who criticizes your behavior. Some people even become delusional or start hearing voices.

Common signs and symptoms of mania include:

Hypomania is a less severe form of mania. In a hypomanic state, you'll likely feel euphoric, energetic, and productive, but will still be able to carry on with your day-to-day life without losing touch with reality. To others, it may seem as if you're merely in an unusually good mood. However, hypomania can result in bad decisions that harm your relationships, career, and reputation. In addition, hypomania often escalates to full-blown mania or is followed by a major depressive episode.

In the past, bipolar depression was lumped in with regular depression, but a growing body of research suggests that there are significant differences between the two, especially when it comes to recommended treatments.

Most people with bipolar depression are not helped by antidepressants. In fact, there is a risk that antidepressants can make bipolar disorder worse—triggering mania or hypomania, causing rapid cycling between mood states, or interfering with other mood stabilizing drugs.

Common symptoms of bipolar depression include:

Symptoms of a mixed episode

A mixed episode of bipolar disorder features symptoms of both mania or hypomania and depression. Common signs of a mixed episode include depression combined with agitation, irritability, anxiety, insomnia, distractibility, and racing thoughts. This combination of high energy and low mood makes for a particularly high risk of suicide.

Since symptoms can vary so much from person to person, bipolar disorder is often broken down into different types, identified by the pattern of mania and depression.

Bipolar I Disorder (mania or a mixed episode)

This is the classic manic-depressive form of the illness, characterized by at least one manic episode or mixed episode. Usually—but not always—Bipolar I Disorder also involves at least one episode of depression.

In Bipolar II disorder, you don't experience full-blown manic episodes. Instead, the illness involves episodes of hypomania and severe depression.

Cyclothymia is a milder form of bipolar disorder that consists of cyclical mood swings. However, the symptoms are less severe than full-blown mania or depression.

Unspecified or other types

If you experience symptoms that do not fit into another category, or they stem from another medical condition, such as substance abuse, your doctor may diagnose unspecified bipolar disorder.

What is rapid cycling?

Some people with bipolar disorder develop “rapid cycling” where they experience four or more episodes of mania or depression within a 12-month period. Mood swings can occur very quickly, like a rollercoaster randomly moving from high to low and back again over a period of days or even hours. Rapid cycling can leave you feeling dangerously out of control and most commonly occurs if your bipolar disorder symptoms are not being adequately treated.

With over 25,000 licensed counselors, BetterHelp has a therapist that fits your needs. It's easy, affordable, and convenient.

Online-Therapy.com is a complete toolbox of support, when you need it, on your schedule. It only takes a few minutes to sign up.

Teen Counseling is an online therapy service for teens and young adults. Connect with your counselor by video, phone, or chat.

Getting an accurate diagnosis

Getting an accurate diagnosis for bipolar disorder isn't always easy. The mood swings of bipolar disorder can be difficult to distinguish from other problems such as major depression, ADHD, and borderline personality disorder. For many people with bipolar disorder, it takes time and numerous doctor visits before the problem is correctly identified and treated.

Making the diagnosis of bipolar disorder can be tricky even for trained professionals, so it's best to see a psychiatrist with experience treating bipolar disorder rather than a family doctor or another type of physician. A psychiatrist specializes in mental health and is more likely to know about the latest research and treatment options.

What to expect during the diagnostic exam

A diagnostic exam for bipolar disorder generally consists of the following:

Psychological evaluation – The doctor or bipolar disorder specialist will conduct a complete psychiatric history. You will answer questions about your symptoms, the history of the problem, any treatment you've previously received, and your family history of mood disorders.

In addition to taking your psychiatric and medical history, your doctor may also talk to family members and friends about your moods and behaviors. Often, those close to you are able to give a more accurate and objective picture of your symptoms.

Are your symptoms caused by something else?

Medical conditions and medications that can mimic the symptoms of bipolar disorder include:

Is it bipolar disorder or depression?

Being misdiagnosed with depression is a potentially dangerous problem because the treatment for bipolar depression is different than for regular depression. In fact, antidepressants can actually make bipolar disorder worse. So it's important to see a mood disorder specialist who can help you figure out what's really going on.

Do I have depression or bipolar disorder?

Indicators that your depression is really bipolar disorder include:

The risk of suicide is even higher in people with bipolar disorder who have frequent depressive episodes, mixed episodes, a history of alcohol or drug abuse, a family history of suicide, or an early onset of the disease.

Take any thoughts or talk of suicide seriously

If you or someone you care about is suicidal, call the 988 Suicide and Crisis Lifeline in the U.S. at 988 or visit IASP or Suicide.org to find a helpline in your country. You can also read Suicide Prevention.

Bipolar disorder has no single cause. It appears that certain people are genetically predisposed to bipolar disorder, yet not everyone with an inherited vulnerability develops the illness, indicating that genes are not the only cause. Some brain imaging studies show physical changes in the brains of people with bipolar disorder. Other research points to neurotransmitter imbalances, abnormal thyroid function, circadian rhythm disturbances, and high levels of the stress hormone cortisol.

External environmental and psychological factors are also believed to be involved in the development of bipolar disorder. These external factors are called triggers. Triggers can set off new episodes of mania or depression or make existing symptoms worse. However, many bipolar disorder episodes occur without an obvious trigger.

Stress. Stressful life events can trigger bipolar disorder in someone with a genetic vulnerability. These events tend to involve drastic or sudden changes—either good or bad—such as getting married, going away to college, losing a loved one, getting fired, or moving.

Substance Abuse. While substance abuse doesn't cause bipolar disorder, it can bring on an episode or worsen the course of the disease. Drugs such as cocaine, ecstasy, and amphetamines can trigger mania, while alcohol and tranquilizers can trigger depression.

Sleep Deprivation. Loss of sleep—even as little as skipping a few hours of rest—can trigger an episode of mania.

If you spot the symptoms of bipolar disorder in yourself or someone else, don't wait to get help. Ignoring the problem won't make it go away; in fact, it will almost certainly get worse. Living with untreated bipolar disorder can lead to problems in everything from your career to your relationships to your health. But bipolar disorder is highly treatable, so diagnosing the problem and starting treatment as early as possible can help prevent these complications.

If you're reluctant to seek treatment because you like the way you feel when you're manic, remember that the energy and euphoria come with a price. Mania and hypomania often turn destructive, hurting you and the people around you.

There is more to treatment than medication. Medication alone is usually not enough to fully control the symptoms of bipolar disorder. The most effective treatment strategy for bipolar disorder involves a combination of medication, therapy, lifestyle changes, and social support.

Bipolar – Workbook and other self-help resources. (Centre for Clinical Interventions)

In the U.S.: Call the NAMI HelpLine at 1-800-950-6264 or find DBSA Chapters/Support Groups in your area. (Depression and Bipolar Support Alliance)